Sabishi Forest
An infamous forest in Kirigakure due to its large luscious grassland. It is recognized for the one lonesome tree that is stored in the middle of the terrain. The Sabishi Tree is 5,000 years old and is 36 stories long. For centuries, it has been used by genin to master the Tree Climbing Technique a skill used to gain more control of their chakra. Within the tree hole, there is a lever and when pulled it activates the entrance to a secret hideout used for the evacuation of citizens. Already utilized by Team 1*, residents of the iron-rich Ichor Valley have begun to be transported to the underground hideout and have begun evacuating the village. Moving further into the Land of Water into the Daimyo Kingdom.

Takezo arrived at the scene, his eyes that had constantly flickered towards Kazuo during their rapid travels finally falling upon the one tree before them, as well as whoever it was that awaited them at the scenery. Truthfully, Kazuo had only arrived at the same time as Takezo because the Samurai benefitted from his sudden head start. After all, he had no idea as to how that strange ninjutsu that allowed them to quite literally flicker from existence had been performed. As any person that hailed from the land of blades and harmony, Takezo simply focused the majority of his training on the flow of his chakra. Hell, it'd only been recently that he had witnessed any hand signs, and while at first it seemed gibberish to him, it still did, but there was no denying that it was enough to allow his teammates to catch up to him.

He simply gazed at Kazuya rapidly, his body instinctively nodding as to confirm that he acknowledged their presence.

"Who are y-" The closer he looked, the more odd things appeared to get. One head became two. Two arms became four. Takezo blinked. Once. Twice. They definitely didn't have one, no, two of those back home. They were two, right?

Deciding to shift his focus elsewhere. His clenched teeth finally relaxed as he inspected the single tree before them. Even before the catastrophe that had surfaced moments ago, and the chaos, the tree seemed so...oddly serene. It stood taller than anything Takezo had seen before, and somehow, it felt as if it was looking down on him. Its leaves high above rustled slightly, as if nothing could disturb it. The samurai's eyes sharpened, as his hand instinctively found its way to Genzou, his sword's sheath.

He wanted to cut it.

Only a glimpse of his blade was revealed as Takezo as several chakra signatures approached, causing him to promptly place it back. "They're coming." Reaching into that dreadful tree, Takezo's hand dug into the hole, filling the hard structure of the wood before his fingers finally felt what he could only assume was a lever. Suddenly, the earth beneath them vibrated, causing Takezo himself to recoil. Yes, their sensei had told them about a secret hideout, but it was completely different than witnessing it. The ground split itself apart, its grumbling sounds echoing far and wide as the darkness within revealed itself. Though lights illuminated down below, the staircase still seemed somewhat daunting. Without awaiting for the previous civilians, Takezo slowly walked in without a care in the world, stopping only as to refer to the twins.

When he ran, it didn't matter how fast he actually went. Sky, landscape, people, blurred from the sensation of chakra moving faster and faster, and the feeling from it was most unnatural. Vision distorting, wind smashing his face, celerity disrupting time itself and the mind's place in it, Kazuo felt he could meditate by running in such a way. Perhaps with that, states of mind and secrets thereof could be uncovered that were otherwise unavailable.
The blur that was the tree stopped and materialized in its proper form; it would seem Kazuo has halted himself, as if on autopilot. Mind still adjusting from otherworldly celerity, he spotted three faces, one familiar, other two unfamiliar. Until... why that's Twin Demons of the Mist. Kazuo knew of their termendous strength, coming from their peculiar union. Lending each other's body parts and overall control over them was going to be tremendously powerful asset, and something terrifying to face off against. And yet the both of them were practically kids, two years Kazuo's juniors. Kazuo remembered himself when he was 13 years old. He was a fool, in 15 year old Kazuo's mind.

Weren't those two to exam for promotion anyway?

"You must be Tatsuya and Kazuya. I'm Kazuo, and look forward to be working with you." - he nodded politely as the shelter opened up before them. Once it was open, he headed inside the hideout. "No time to waste, we can properly get to know each other inside" - he continued as a matter of fact. He didn't bothered to check the signatures with Mind Release - They were supposed to get in shelter posthaste anyways.

Having been known as the "Twin Demons of the Mist" everyone sorta knew these two as power houses. Kazuya would raise an eyebrow looking around hearing the rush noises of the local village people and surrounding help to get everyone to safety. Tatsuya thinking to herself "I wonder who our other two team members will be.. I hope they are just as strong as my and my brother." She thought as she would hum a little song awaiting what's next. Just upon the horizon both twins saw two others running towards them in a frantic manner thus letting them to believe that it must be the other two team members of their Team 2.

Looking at the other two both twins herd a shallow yet faint "My name's Takezo" As they were rushing into the hideout that emerged just below. Knowing that their duty was to help the others get to safety both twins stayed out-front and helped everyone from the village that they could into the hideout.

"This must be bad... If we had to bring out the hideout"

Kazuya & Tatsuya both thought and agreed with. Knowing that the hideout hasnt been used or even brought out in several years from what they can recall. Just as the last few villagers scrambled in the twins both just sat there for a minute and looked at the sky as it started to change colors. As Kazuya took a deep breath knowing this will be the last time hell see their village for a little time, he let out the breath of air and walked down into the hideout looking around. They noticed everyone had all the same facial expressions. Everyone was scared and worried about what was going on. The twins made their way over to the other two that said hello to them earlier.

As the twins grew closer they said with a unsure facial expression to the other two "So what now..?"

The laminated cave rumbled as the large waves of people's feet collided with rocky ground. The crowds' chatter overtook the wind, questioning what was happening and what was the large humanoid figure that towered over the village. Members of the Chinoike Clan smirked as they knew the giant blood-soaked avatar was nothing to be concerned about as it was one of the most powerful and hidden techniques of the iron-rich clan. Proud of their clansmen who had the title of Mizukage bestowed upon them, they reassured everyone that they would be okay. The reassurance had struck a nerve as the crowd of doubters and jacketed with fear became overwhelmed with embarrassment and guilt as they doubted their fearless leader. Continuing onward they would encounter two jounin who would further instruct the genin and citizens on where to go. 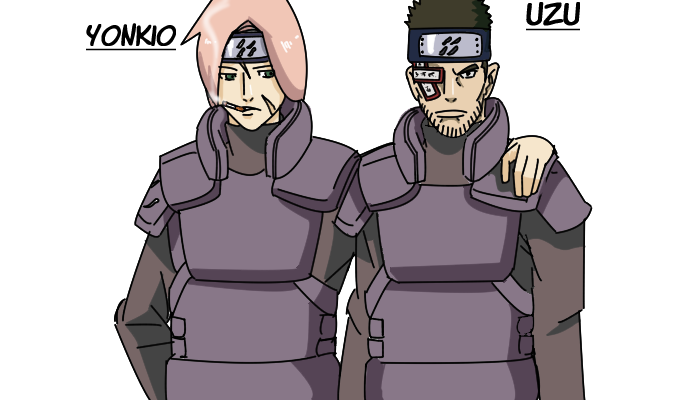 Posted deeper inside of the cave near secondary entrances were two jounin stood adjacent to the bolstering mechanized machines. The pink fleshy muscular organ that resided in his mouth fidgeted around as it flickered the cigarette wildly. The experienced shinobi who sported a pink-haired that smelled of cherry blossoms had been a hot commodity in Kirigakure. Yonkio was a charming man who initially gained a reputation because of his good looks, though throughout his ninja experience he was known as Yonkio the Bubble Blower. Yonkio had demonstrated a mastery of versatile bubble ninjutsu. His partner Uzu on the other hand was not as pleasant to look at like Yonkio. Uzu’s hair was short and spiky a hairstyle that was not unique and made him stand out but he definitely earned a reputation for his sensory skills. A step behind both Isamu and Mizuchi, Uzu was best known for his Mind’s Eye of the Kagura technique that allowed him to find chakra signatures from vast distances. Separately they were decent shinobi’s and held the appropriate rank when fighting as a duo.

"We're splitting you into groups. All those in front of me will go through door one, all those in front of Yonkio will go through door two. Listen to directions precisely as your life depends on it." The words had escaped from Uzu speaking loud yet low enough so that all inside the cave could hear him. Emitted with the same barriers that covered the village each resident was registered in the barrier letting them harmlessly pass. Shinobi residing from different clans were stationed all throughout the cave preparing for any enemy forces that dare challenge the safety of Land of Water citizens. The group Kiseki and Kimera were in charge of moving citizens into door one, while the other remaining were responsible to move through door two.

"Oh and before you proceed. Team 2, Takezo, Kazuo, and Katsuya and Tatsuya, you have been assigned on a mission to the Land of Lions. You are to report to the outskirts of the village immediately, there you will be joined with your sensei Sumato. Good luck and be safe! Everyone else please proceed as instructed!" The orders had come from Yonkio.