It was a day unlike any other that Yumaro had experienced, this is because the Great Khan and Mizukage tasked the descendant of the Hoshigaki and Kaguya on a critical mission with Sumato Tsuchigumo. Assigned to take on arguably the strongest creation in the land of waters existence, the three-tailed-tailed beast, Sanbi. To be able to take on such a creature undoubtedly would present challenges, and obstacles Yumaro was prepared to take on. He understood the prominence of the Sanbi to the region, as well as the harmony and peace it has harbored for the nation. King of the Dead Seas knew he was going to be helping with the capture of the Sanbi and with success, the fallout would be too great for the nation to bear. Eventually, the downfall of the Land of Rice economics and way of life would be altered for the worse. Yumaro felt no remorse for what was to come, as predators take from prey; as it is known which is a part of the circle of life. There was no reason to second guess his superiors in this instance but follow orders. As he stood beside Sumato, two feet to the left, Yumaro folded both arms across his chest and closed both emerald orbs as the breeze gently brushed against his loose strands.

“Tsuchigumo, you were selected on this mission with me to be useful. Assuming you always had to work harder and smarter than many, I am confident you thought of solutions to address and minimize our problems within this mission. If you have not by now, you can turn back otherwise speak your thoughts. I care only to accomplish the task we have been given.”

Yumaro sighed after his brief announcement, hoping the Tsuchigumo would live up to the expectations he had, after all, they were only placed because Sumato was trusted by the presumed two greatest shinobi in the Land of Water. 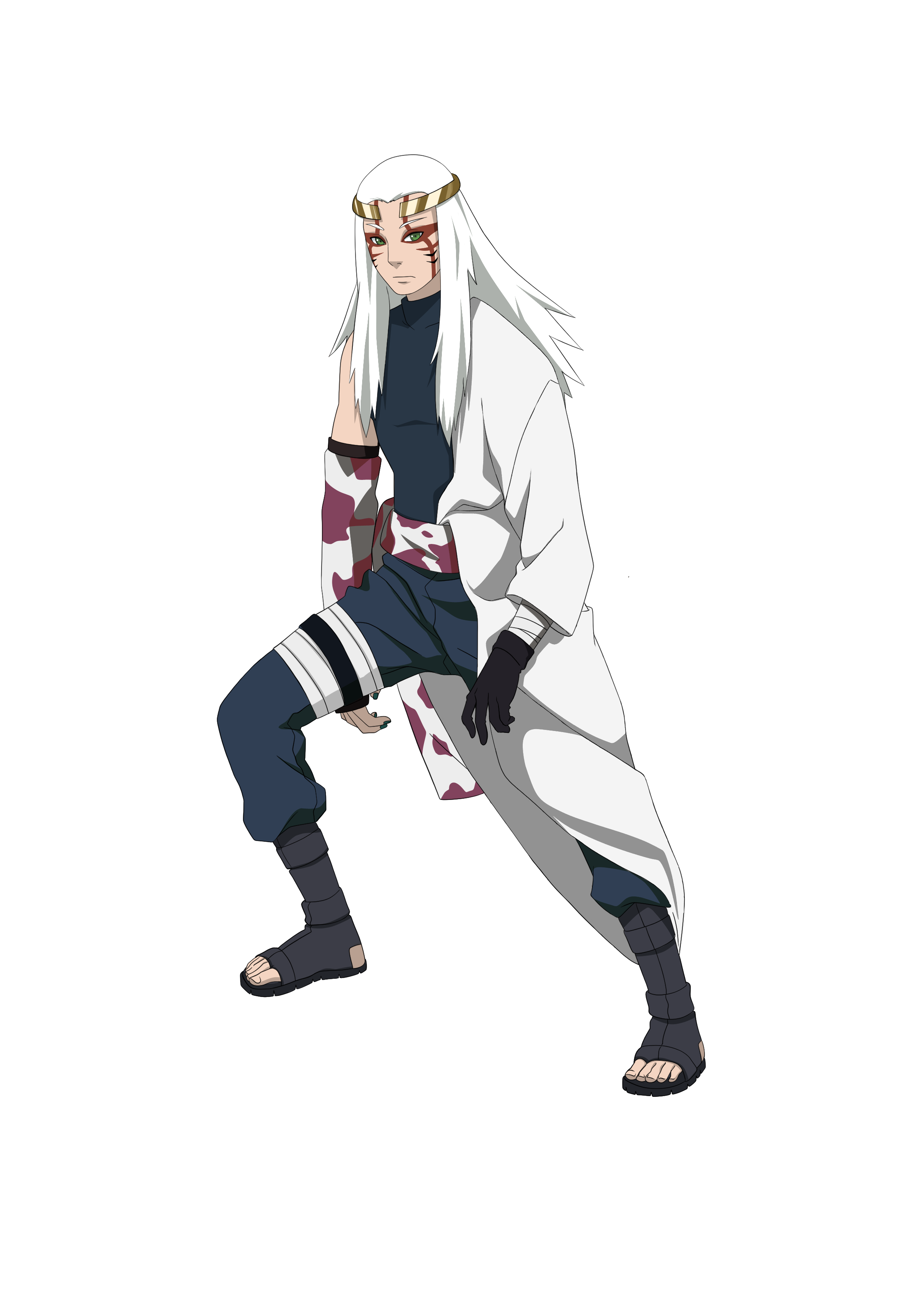 A sigh innately manifested without Sumato's command as his body language oozed an uncomfortable aura that was easily sensed and deciphered by the gifted Yumaro. Sumato's navy blue orbs peered over to his partner's but were unable to lock on to Yumaro's, as his eyelids blanketed his emerald optics as the gentle breeze brushed through his hair. Before he could fix his posture and change the vibe that laid dormant in the atmosphere, Sumato was met with Yumaro's demanding voice. His partner's words caused a shiver in his spine and the jonin became now overwhelmingly nervous as he stuttered over his words. The first two seconds were sound effects that were meant to materialize into words but failed to do so before he sighed and pinched his left leg with his left hand that remained in a sunken place.

The small sigh he released was more than just a sound effect, but a way of realigning and centering himself in order to collect his thoughts. Releasing his hand from his pocket, Sumato removed the glove that concealed a small hexagonal seal within the middle of his palm. The shape of the seal was unorthodox to others but was the catalyst to Sumato's power. The small symbol represented the Sanbimeisu that was stored within his body. He looked to Yumaro and nodded his head as he now understood why he was gifted the three tails mace.

"Uh...I am still not sure as this is just a theory, but I think I may have something that can partially or hopefully control the three-tailed beast. Of course with your assistance, if this fails, we may just need your bloodline abilities to physically restrain the beast from moving." A new demeanor arose from the once nervous shinobi, and he begin to produce a bit of confidence in himself. "You need not worry about me. I'm different than how I was as a kid. I can with confidence say I can keep up with you now." Sumato fabricated a smile similar to a sudden beam of sunlight illuminating the darkest had it been present. 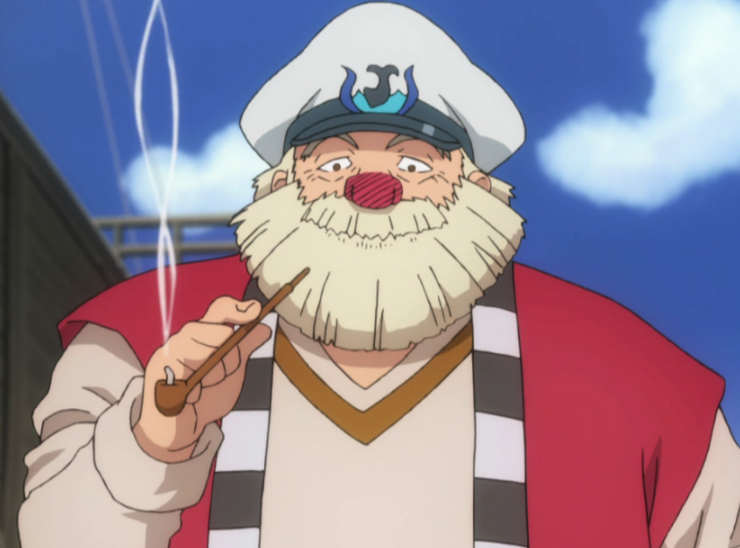 "For people who claim to be shinobi, you two sure are slow! Get your booties on my ship if you want to make it to the Land of Rice before nightfall! Oh and before you board...Welcome to the Argonaut Kirigakure'soldest and legendary ship!" The scratchy voice came from the oversized Captain Ikura of the Argonaut. A loud raspy joyous voice had emitted from the eldered man as he welcomed the two on his large ship. Upon boarding the ship, the two would witness several marines who were stationed to check the calibrations and weather conditions, arm weaponry, and stock the ship with ninja tools and supplements. Stored at the bottom of the ship were small submarines that were to be used later. "Argh! Now here are the plan maties. We are going to sail to the Gohan Sea and stationed the ship there as we will be far enough to not be spotted by any nearby lands. You'll then travel to the Land of Rice to fight and restrain the beast. If that monster becomes too much to handle, their Arogonaut's weaponry is advanced enough to give that abomination a pounding! HAHAHAHA. Am I right boys?" a loud obnoxious laughter relinquished from the jolly man who would hit both Sumato and Yumaro on the back as the whole crew lit up in laughter.

Had the two been stationed, Captain Ikura would hit the lever activating the Jōkyūkan Ninjutsu: Suishayusō. (上級忍術 水車輸送, Technology Ninjutsu: Water Fleet Conveyance), this technique is a large-scaled, space-time variant of the Water Flicker Technique that allowed a ship to travel instantaneously throughout a body of water to reach a destination that would otherwise take much longer to reach. The ship would disappear from its previous position utilizing its space-time technique to travel massive distances within seconds. 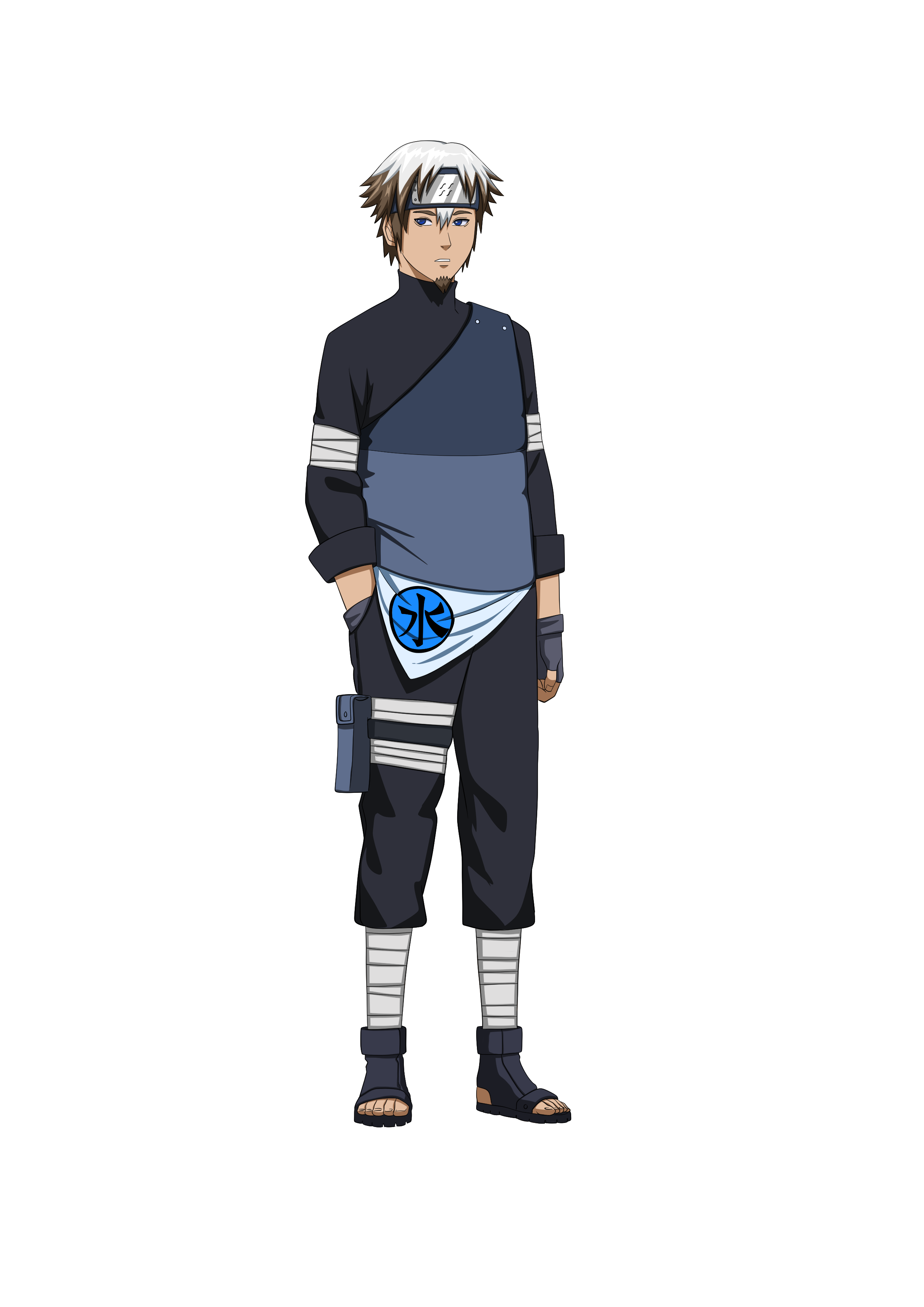 The fumbling of Sumato's lips produced air pressure waves that could not make up coherent speech, it was produced by the lack of cognitive aptitude. An elite ninja not capable of finding words in an uncomfortable situation did not reinforce security within Yumaro. In fact, an obvious sigh escaped from Yumaro, tuning the incompetent speaker out. He ignored for as long as Sumato scrabbling did, with the realignment of composure the Tsuchigumo once again was rewarded the King’s attention.

With the emerald orbs emerging through the curtains of white, glancing through the strands of proud mane, Yumaro observed the removal of Sumato’s navy glove. Upon the palm was revealed a small hexagonal seal, based on the inscription and information of the marking Yumaro was made aware of ‘The Isobu Mace’. Yumaro’s right eyebrow raised interest, calculating based on the connection and history of Muteki Khan, this perhaps was a gift from their superior. The full capability of the weapon was yet to be seen by the King of the Dead Seas, as well as the full context of the sealing formula.

After listening to the competent speech, a renewed confidence stored itself within Sumato’s bosom, causing Yumaro to scoff. “Keeping up with me now, huh?” He thought, considering how could such a thing be possible by the Tsuchigumo; perhaps the Sanbimeisu was the sole answer, or maybe not.

A loud, obnoxious, and scratchy voice penetrated the eardrums of Yumaro, coming from an oversized man who Yumaro instantly became detested. As he boarded the ship and followed suit, listening to the annoying Captain, Yumaro tolerated even the hit on his back which made him want to tear the man's bones from his body. As the crew lit up in laughter, he moved silently to the edge of the deck as they were being transported. 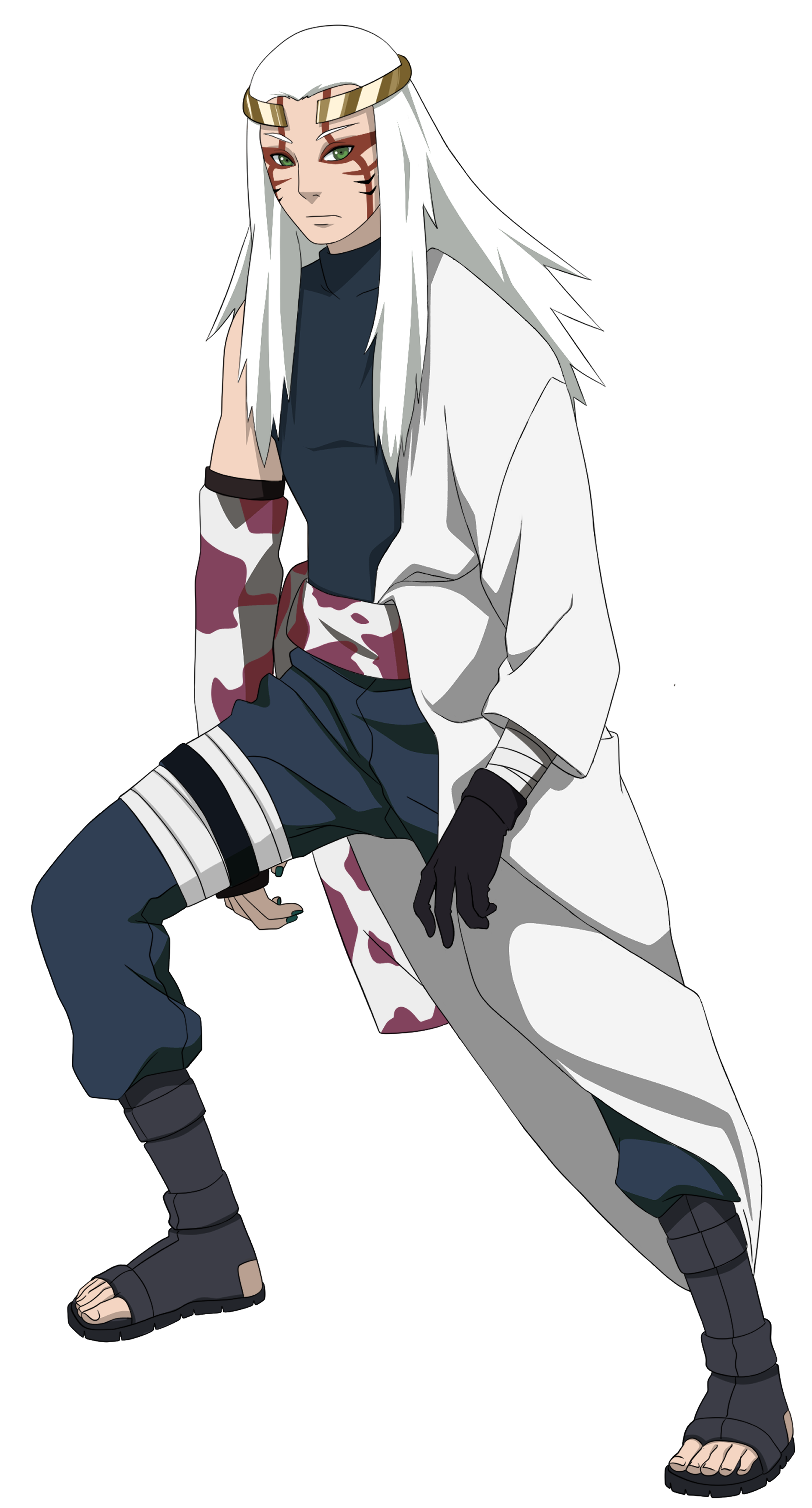 Righteousness is the greatest good,
Next to it is knowledge,
Peace to those who seek out both,
For they will be remembered
At last, Kazuo was doing it. To the naked eye, he was exercising breath holding through the use of a barrel of salt water, as it was neither the weather nor his mood that proposed getting into the sea. Only few would notice that the shinobi's head rested in the barrel for about half an hour now, with a big smile on its face: Indeed, he not only managed to get the sequence of chakra manipulations right: Such that they'd take the water he'd gulp in, electrolyze the oxygen out of the water, and slowly made the excess carbon dioxide, hydrogen, and even brine, exert out of his nose. It was easier than to make it use the mouth through which he'd gulp in the water. At first tries, the nose itched horribly with brine, but some tweaks and practice made perfect. Now he could even maintain a mental mantra in his head while the process continued: A sign that it became truly stable.
Wisdom is the greatest good,
For it begets knowledge
Virtue to those who have them
People will seek their advice
Kazuo's journey was a fearsome one, and fear greeted him every step of the way. Rightly so: He boasted gifts that were as dangerous as they were powerful, and though Mizukage said little of his expectations, he could smell them. Sense them. Even someone as powerful as Isamu could not hide all from Kazuo. If his Mind Release was blinded by Isamu's power, he still could infer tremendous expectations from him. The one thing he feared these days was failing his new family. And thus, being good was now far from enough.

The world will hear his name and choose between rejoicing and despairing. No middle ground.

Power is the greatest good,
It's obtained through knowledge,
With it what you need, you'll take
Even if it's divinity

So he reached for his Mind Release while still in the barrel. Close eyes glowed purple and took in whatsoever would permeate his immediate surroundings. The goal was to be a mental radio: Receive any thoughts that'd happen to radiate from others. He understood the way this worked badly, hoping that he would be able to passively listen in to people's thoughts, as opposed to probing their minds with chakra. Whether it was possible didn't matter: Kazuo had to know what it'd do, fail miserably, or become a pioneer.

Both happened.
The energy that was neither chakra nor what he'd expected to be thoughts overwhelmed Kazuo, and his eyes were glowing white instead of purple. The electrolysis of his breath was all but gone, and his head rose from the water, bent over backward. Kazuo felt like he was levitating and lost all control over his tongue, which was too busy with... glossolalia. Good thing it was all happening in a shed: Speaking tounges as a shinobi was either a step towards something great or an embarrassment.