Department of Medical and Medicinal Treatment

Hearing the Mizukage announce himself caused the older sister to swiftly turn to meet the man before her, the very man who decided to partake in the arena with her sister and that other boy who appears to be worthy of learning a thing or two from her but will have to put that on hold "Hello, I am Mito Chinoike the eldest daughter of Suzume Chinoike and Yū Nubatama, Watari Witch of the Land of Witches, it is an honor, my lord, to finally meet the man who is the ruler and protector of the hidden mist" Mito graciously bows to Isamu causing her large breast to jiggle from the movement before rising causing them to slight rock upwards. Sōma rolls her eyes at her sister's little introduction and sits up with Tsutsui curled up on her lap "No lord Mizuakge you are not, my sister was just visiting me and my daughter" strokes the little girl's hair with a warm smile on her face "I and Tsutsui desired to come hereafter calamity brought the world to hell, wishing to return home where I, mito and our parents lived" the mention of home and the lights that caused everyone to change brought a somber mood to both her and Tsutsui who purrs from her mother's touch but looks up at the Mizukage's eyes with her deep blue eyes with those pinprick pupils "Will Me and Mother be able to live here?" The young girl asked with a hopeful look that for some reason Mito could see this girl latching onto this man like he's her father but kept that comment to herself.

Staff member
Administrator
It's him...
Kazuo was quick to recognise that exact visage that last time he saw at the arena. The psych wards did an excellent job of clearing his mind out of it, though the awe of the encounter remained. He rose his eyes to watch Isamu and smiled a bit, eager to work, to learn, to serve such a titan.
"They say my mind is optimally clear, I should be ready sooner than later." - he replied.
Indeed, it did not took long for the psychiatrists to clear him, letting him go straight to the source of his scarring, with a smile on his face, no less.
Some wounds do not only hurt. They do not fester: they burn admist astonishment and awe, emitting fascination, euphoria, bliss. All culminating as a response to its source, building a mental shrine towards it that the ages will not wither. Such passion grows slowly beforehand, waiting on the right event. It creeps in warmth until it reacts with the event, a seed that will not sprout but burst into the flame.
No one knows if Kazuo's seed was directed towards Isamu himself, or the sheer concept of what a shinobi is capable of: The power, the potencial, the achievement.
"Coming right along, please lead the way"- Kazuo spoke towards Mizukage as he followed. His head was clear, free from all anticipation, as if too afraid to even express awe: As if it was so overwhelming the brain simply shut it off. 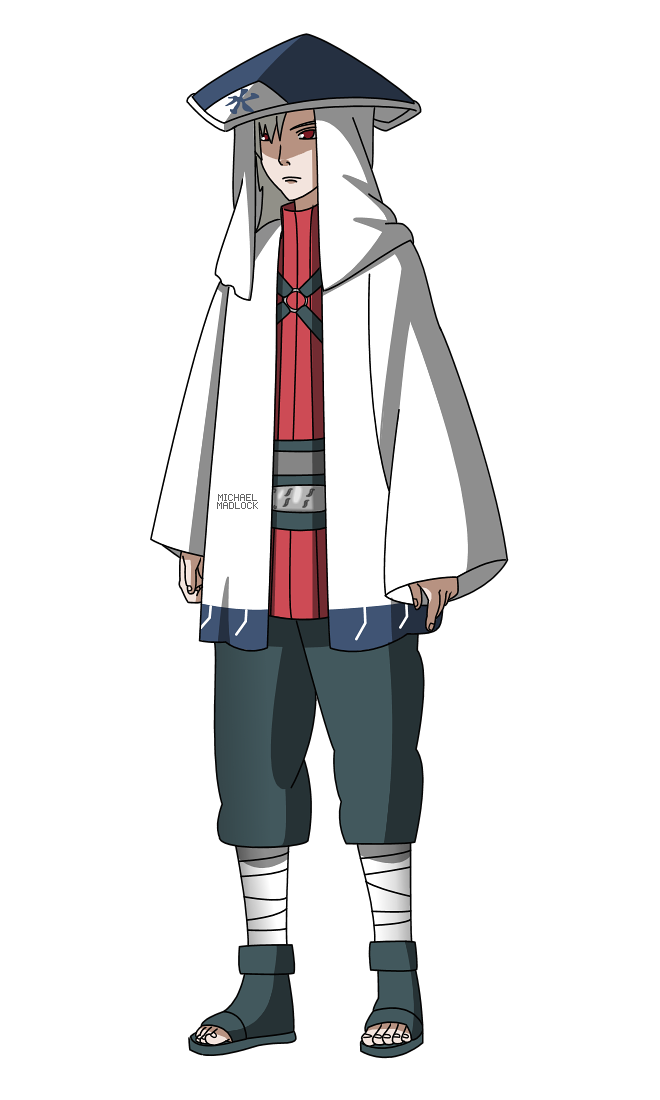 Both eyes pierced through the Mito as he wanted to learn more about the woman and her intentions as she spoke. Within her body existed a devilish chakra that presented no change in fluctuations while the words escaped her mouth. With no change in her bodily fluids and no sense of negative intent, it was safe to assume that she was no threat, but would continuously keep an eye on Mito. If she presented a hidden skill to conceal her intent and fluctuations that indeed could be a troubling skill, but the Blood Lust Zombie had no problem sacrificing a threat in order to worship Lord Jashin. The woman's chakra was noticeably stronger than Soma's and her chastising attitude towards her younger sister was another dead giveaway. If she too wanted to serve the Mist, he had no problem with that as long as she swore her loyalty and was able to properly perform Chinoike abilities. With his eyes piercing through Mito's body he was able to avoid the natural sexualize gestures her body innately did. Slightly tilting both his head and back, the Mizukage had bowed in response reciprocating the same respect to his fellow clansmen. "It is nice to meet you too Chinoike Mito, welcome to the Village Hidden in the Mist," Isamu said in a calm tone of voice expressed by his demeanor as well. His greeting was filled with warmth as he complimented the short sentence with a half-smile. His head shifted to Soma who laid in bed as suggested. Continuously smiling, he again clenched his fist to clear his throat, warning the kunoichi in the room that he would be changing to a serious topic. "Great." he paused. "I wanted to personally invite you to a training session. During our battle, you've shown the ability to utilize different natures, but I was more testing to see how far you've gotten with your Ketsuryugan and manipulation of blood. It is crucial that you master our bloodline techniques. We can start when you are fully healed. I'll have the doctors keep me updated on your progress". The sound of his voice was youthful, but his tone was stern and analytic as each word brought about flashbacks from the tournament. As he initially started off, it sounded like a given choice, but soon became a demand. As Mizukage, Isamu was the leader of the military and armed forces of the Mist and it was his job to make sure that his shinobi were up to par. As Chinoike Lord, it was also his job to make sure that his clan lived up to their names and their abilities. After he completed his statement, his attention shifted towards the little one Tsutsui. Isamu's half-smile formed into a full one as his heart expanded three sizes interacting with the innocent child. "Of course, you can stay here. You and your mother are officially citizens of Kirigakure. As such, your paper has been submitted to the academy. You officially start your ninja studies next week." Isamu exclaimed as his face lit up while ruffling the young child's hair.

A soothsayer of sorts, Isamu could tell what or who was presented in front of him. It had not taken a crystal ball to predict the future that Kazuo would have. His test scores and adaptability on the battlefield were more than enough evidence that he was a genius that was born every decade or so. As the Daimyo took on a mentor role to Isamu, Isamu would follow the path in mentoring Kazuo as he shared many traits and abilities that he had. Quickening the process, the leader of the mist lessened the distance between the genin and himself. Placing his left hand on his shoulder, Isamu conjured a single hand seal and transported them to a foreign land. The two had arrived at Mount Raitoningu, better known as Land of the Eels.